We have our third winner in the:

Well … once again someone else has entered and … THEY WIN!

The new winner is:

Donald is a very bright and very funny young man who is also the son of Don Wilson. His dad graduated 3 years ahead of me in high school at S.S. Seward and worked on our farm as a teenager for many years back in the 70’s and 80’s! He was a great worker and good friend.

Here is the latest winning entry:

Many people feel most content in their rooms, or perhaps doing an activity they most enjoy. Weird it may seem, but I feel most myself while being locked inside of a three-drawer office filing cabinet. My marred childhood led to what seems like a strange discovery, but it led me to an epiphany: everyone is just a file.

When I was nine years old, my parents passed away at a rave due to an overdose of MDMA ecstasy. My only memories of them are that of abuse and neglect due to their abhorrent drug addictions, not only to ecstasy, but to heroin and crack as well. My worst memory was when my father was in a crack-induced rage and swung at me with a metal folding chair, thinking I was an opponent in an upcoming wrestling tournament, breaking three of my ribs. I was rushed to a hospital, where I stayed for twenty one days.When I got the notice that my parents passed, I felt bittersweet, knowing that the years of abuse had finally ended, but a void was created where my parents used to be.  The void was quickly filled by my uncle Tertius, who took me into his household without question. However, Tertius proved to be just as abusive as my parents, and I quickly turned to codeine, having a supply to alleviate the pain of the injuries my dad gave me. When I turned twelve, I got a job working at a local three-story office building, sorting office supplies in the storage rooms. The manager of the office, Tria, became a mother figure to me, giving me not only a place to work, but guidance in life. She even helped to cure my addiction to codeine. However, after three years of working at the office complex, Tria passed away. To cope, I ran away and fell back to codeine. I was walking down my town’s Third Street, and found an aged, beat up three-drawer filing cabinet. My mind was cast back to three years ago, where I first got the job working with Tria at the three-story office complex. I quickly jumped inside the cabinet, knowing that the three drawers would offer me the comfort and solace that codeine could not. As I lay inside, remembering the how at home I felt working for Tria, I decided that this cabinet would be my new home. For forty days and forty nights, I wandered the streets, but I always came back to the three-drawer filing cabinet.

As the fortieth night began, I climbed inside the cozy cabinet, and it hit me: I was a file. We are all files, trapped inside the filing cabinet that is life. I wrote a three-page paper to the Triad Record, describing my thoughts on the situation. We enter the filing cabinet little files with nothing in them. As time goes on and on, our files grow, until one day, they are removed from the cabinet. That is, we die. These realizations brought me the epitome of tranquility that I always hoped for, inside my new home, the three-drawer filing cabinet.

In short, I should get a free Bloomin’ Onion coupon.

Link for the second winner: https://muckville.com/2014/01/29/we-have-another-bloomin-onion-gift-certificate-winner/

My campaign has now been modified. Since I now have a literary agent I no longer need to raise funds for an editor for my memoir. Now I am exploring the creation of a tv show based on my life and experiences, the same experiences detailed in my yet to be published memoir “Muckville!” 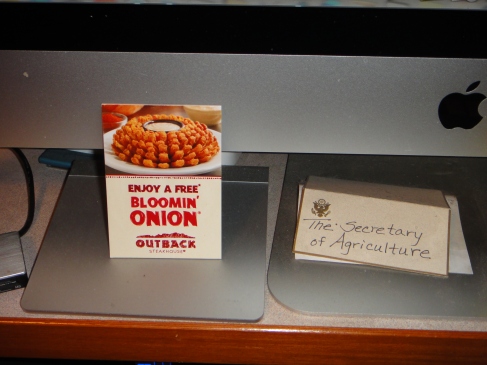 3 thoughts on “We have still another Bloomin’ Onion gift certificate winner!!!!!!”