The following is an excerpt from my yet unpublished memoir, “Muckville: Farm Policy, Media and the Strange Oddities of Semi-Rural Life.” September 23rd is Eve and I’s 23rd wedding anniversary and this little vignette is about one of our favorite past anniversaries … enjoy! 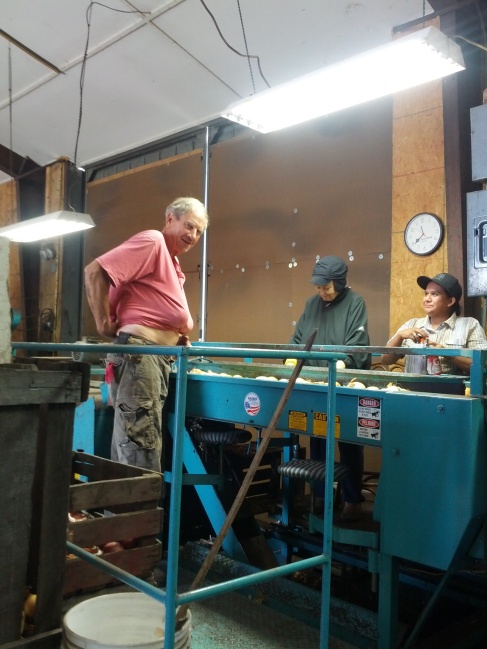 Eve and I were married in September of 1990. Being married in September meant that if we ever moved back to the farm our anniversary would always come in the midst of one of the busiest and most hectic times of the year for me. So, no “get-aways” or mini vacations for our anniversary, it would always be limited to a dinner out together, after work. In 2007 we went out to a local restaurant, Limoncello at Orange Inn in Goshen for a romantic dinner. My parents, who live next door, would usually watch Caleb and Jonah and they said they would again. It was a wonderful dinner and since it was our anniversary they gave us each a shot of limoncello liquor, which came after a few glasses of wine during dinner. At this point Eve and I are feeling good, Eve really good (since I was driving), if you know what I mean. So she’s feeling all romantic and fancy and would like this special moment to continue a little longer, if you know what I mean.

On the way home she called my parents on her cell phone to see if they wouldn’t mind watching our sons for a little longer. My dad answers the phone and Eve tells him we are on our way home and she gently asks if they wouldn’t mind watching the boys a little longer. Guess what … HE DOESN’T KNOW WHAT SHE MEANT! He says, “I don’t think so, Gracie doesn’t feel that well and we’re tired, so you better pick up the boys.” Click. Eve growls, a soft growl She isn’t happy. And then a chain of expletives uttered forth from her mouth. It was potentially a wonderful moment temporarily dashed. So, we picked up the boys and later that night we picked up where my parents left us off, if you know what I mean.

The next morning we’re grading onions and my mom and dad are picking rots and I’m operating the barn forklift, like I usually do.  At the grading table are a couple of our Mexican farmworkers, a husband and wife who have a moderate grasp of English. Well, my parents wave me over to the grading table (which I really hate, because I jump off that forklift enough during the day as it is) and my dad starts to gripe at me. He says: “Uh, that was a bit much there, don’t you think? We watch your boys for the dinner and you want us to watch them longer (by the way, we called them at 7pm, not midnight). That’s a bit much.”

I’m stewing but I just nod and walk away. About a half hour later they call me back and my dad gets into it again. He says: “you know, your mother and I were just talking and we can’t believe you asked us to watch them longer. We were tired and your mother didn’t feel well. That’s a bit much, won’t you agree.” At this point the farmworkers are starting to snicker. But I said nothing and went back to the forklift.

They then called me over for a third time and once again my dad starts saying “that’s a bit much you know” and adds “and you mother wants to tell you too.” At which point I exploded “WE WANTED TO HAVE SEX! SEX! WE WANTED TO HAVE SEX ON OUR ANNIVERSARY WITH NO BOYS IN THE HOUSE. SORRY FOR THE REQUEST!”

Lydia and Geraldo the Mexican farmworkers who understood fully what was going on, including what Eve and I wanted to do the previous night, at this point burst out laughing. They clearly figured out what we wanted…. if you know what I mean. Then my mom and dad started to laugh and my dad sheepishly said: “Oh, okay.” He finally knew what we meant!