The following below is an excerpt from my unpublished memoir, “Muckville: Farm Policy, Media and the Strange Oddities of Semi-Rural Life.”

Many years ago, during one of our initial disaster seasons (post 1996) my brother and I noticed our dad started sniffing his hat. Just like that. We’d be in our office, thinking about how bad the crop was due to the weather, and my dad would take his hat off and sniff it. A good, deep sniff, followed by a series of mini sniffs. Just like that. After a few dozen times, when it passed being a tic and was obvious now a codified and repeated habit, my brother and I asked my dad, “why the hell do you keep sniffing your hat?” So he said, “I can smell the stress.” “Huh?” “The stress, the trouble, the pressure, I can tell how bad it is by the smell of that smell.” “What’s it smell like” we asked. “Strong” he replied, it’s a bad year and I can smell it in my hat.” So, only mildly grossed out we said hey, whatever floats your boat dad, but, that’s weird we told him.

A few years later, in 2010, my Facebook friend Mike B. once got a fortune cookie that said:

“Never smell the inside of a hat.”

I kid you not. He took a picture of it and e-mailed it to me. In 2009 my dad let me chronicle hat sniffing in a series of photos. They are now saved for posterity. And here they are: 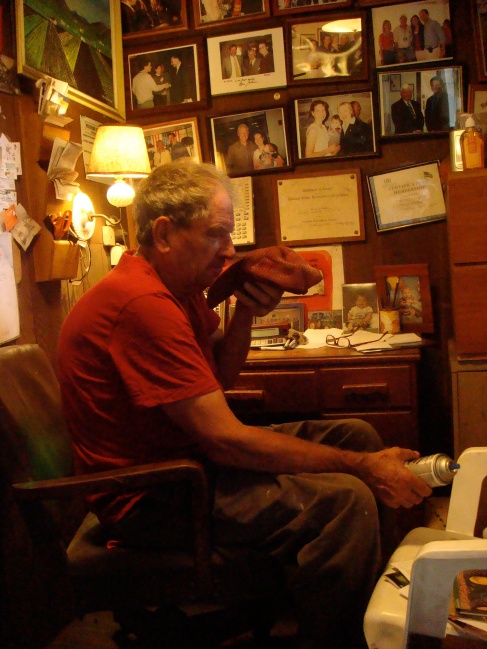 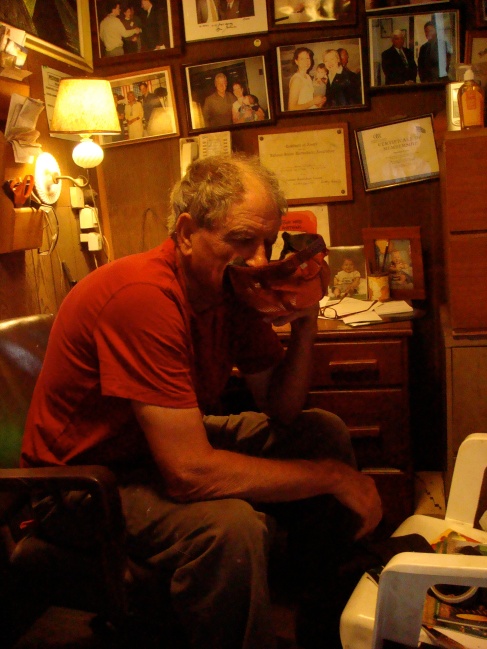 So, my mom must call four five times a day, every day, asking “where’s your father?” She calls the barn, she calls my house, she leaves messages on the answering machine at the barn. I’ve thought about composing a Dr. Seuss like response but instead I’ve come up with a better idea … I’m going to microchip my dad and give my mom the code …

This comment of mine above, which was originally posted on Facebook, led to my creatively genius of a friend Donald W. to compose a response in the form of Dr. Seuss that touches on my dad’s hat sniffing, my mom’s eternal search for him, my love of 4 Lokos and Neurogasms and of course … onions!

The Dad Who Smells his Hat Comes Back, By Dr. WizSuess

This was no time for play. This was no time for fun. This was no time for games, for the time to harvest the mud grunions had came. Mud grunion harvest time was not a time to disappear like a jerk, mud grunion harvest time was a time for work.
All those grunions stacked in the bulk boxes so high had to have to go, have to go where the hellamumfifsis is that guy?
When our mother went to town for the day, she said, ”Somebody has to keep an eye on that guy, somebody, somebody has to, you see!”
Then she picked two somebodies it was Brian and me.
Well…. There we were. We were working pulling ends on the field just like that when who should appear but Ol Hat Sniffin Cadillac Jack!
”Oh-oh Brian said. ”Dont take you eye off ol Jack, if we lose him again mom’ll give a wack!”
I said ”Oh nooooo Jack not this time you hear, I watch you and watch you like Skin Head watches his beer!”
”Disappear!” laughed ol Jack. ”Oh no, no, no need for alarm, Im jus gonna go check the four lokos back at the farm!” ”You two keep your mind on the mud grunions and the Zong Wokets we hired, Im gotta go check on the pressure in the forklifters 5th & 8th tires!”
Then ol Hat Sniffin Jack grabbed this throat mimicking a person who is so parched they can spit and pronto he was gone just like that lickety split!!!
It was then that Brian and I hatched a plan, a plan to help mom keep track of her man. We’d buy a device a GPS and inject em…well we would inject it right up his….
Solar Plexus…when he was sleeping of course so he’d never suspect us!
So I ran to the barn and was taken aback, for there was ol Jack just a sniffin his hat. Thats when I got mad and screached at my dad…we no time for hat sniffin you disappearing curmudgeon there’s work to be done harvesting grunions!
Now get out of this barn we dont want you about….I’ll take the dammed Four Lokos and dump them all out!
It was then when my mind got a nudge to think like a think like a Hollywood judge! Id get a ankle lock not one but two to be exact and just like Lindsay Lohan I lock his ass in ankletracking Lo Jacks!
Well Brian and Mom and all the Zong Wockets rejoiced and regailed and sang songs of celebrunion…… as we hauled and hauled and gradzooted the mud grunions….for it was no longer a worry to look for Ol Hat Sniffen Cadillac Jack with his disappearing spasms now if only I could thinkafy a way to get Eve to drink the Neurogasms!