The following is another excerpt from my yet unpublished memoir, “Muckville: Farm Policy, Media and the Strange Oddities of Semi-Rural Life.” It involves my chance encounter on Capitol Hill with Kermit the Frog. 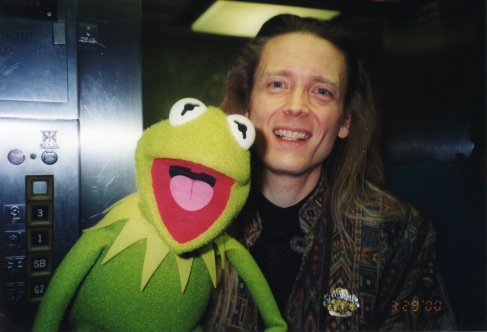 Kermit on the Hill

I was in an elevator in the Rayburn Building in Washington DC, on March 29th  2000, with four or five other NY Farm Bureau people, and in walk these four or five people, including this guy with this really, really big Kermit the Frog muppet. So what do I do? I spaz out. I’m thinking to myself, “maybe this is Jim Henson’s kid” or something like that. Spittle, from excitement, was coming out of my mouth. Like a typical tourist rube I pull out my camera and get a picture.

As we briefly rode the elevator and chatted I realized he wasn’t related to Hensen but I asked him, “why are you here … with a big Kermit no less?” His replied that they were lobbying something about exotic animals and he made reference to a story recently in the news about a kid who got his arm chomped off by a tiger. I think he sensed my disappointment, that he wasn’t really a celebrity himself.

(Note: I later discovered he was Steve Whitmire, who is actually quite a celebrity in the Muppet World: http://muppet.wikia.com/wiki/Steve_Whitmire)

He then quickly added, as his entourage stepped off the elevator … “I’m just here goofing off, to help out a bit. I’m really just here to help out Tippi.”

At that point one of the members of our Farm Bureau group gasped, for she was standing right next to her the entire elevator ride, “that’s Tippi Hedren.”

Then, I really spazzed out. I am a film man. I have degrees in broadcasting and film studies. I actually took a class on Alfred Hitchcock in graduate school at the University of Iowa. Hedren, the Hollywood starlet. The star of “The Birds” and “Marnie.” The only actress to be sexually assaulted by the great, fat director. She smooched Sean Connery for cripes sake. And do I notice her? Heck no. I must have been 2 to 3 feet away. I probably could smell her I was so close. But notice her? No way. I’m fixated on a stupid muppet. And of course, I get no picture of her. Again, only a picture of … the muppet.

That’s right, that’s me in a nutshell. Back in high school I wasn’t thinking about girls. I was thinking about “Star Wars”, and Ewoks and the real meaning of the old “Land of the Lost” TV series.

I found out the next day, from Representative Gilman’s legislative director Todd Burger that Bo Derek was there too. If I had known that I would have probably dumped the farming lobbying group and “helped out Tipi too” for the rest of the day. But, if Eve found out I probably would have been on an “endangered list” also.