Today, like most days during late July thru late September was really busy. We were harvesting about 7 acres or so, and a car pulls in. Sometimes people that have been stopping by for years pop in to try and buy some onions. Sometimes total strangers just pop in looking to buy some onions. That latter happened today when during a lull between trucks a car pulled in and these three characters popped out: 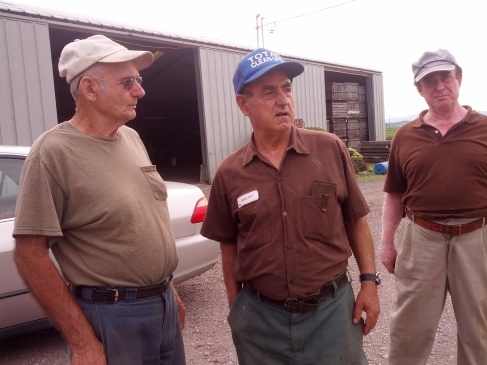 As soon as these guys started waddling around I thought to myself, “oh crap, it’s Larry, Moe and Curly.” I wasn’t far off.

When they pulled in I was busy on the big field forklift bringing onions in the barn so they would be dry for grading and packing tomorrow. I really didn’t have time to stop. Once a full army truck pulled in I had to stop and work on on unloading the truck. So, I let my dad handle these characters, it’s right up his alley anyway. 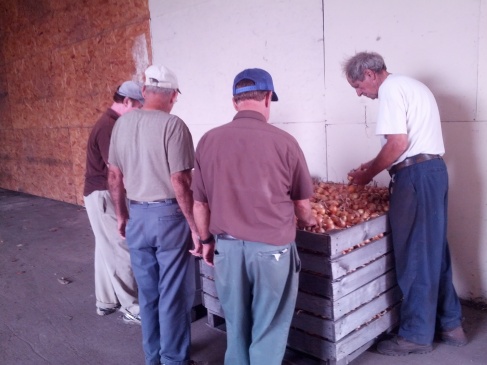 As I kept bringing the boxes in I watched as they walked all over the place … taking a handful of onions from one place, then from another … my dad right behind them, showing them around. We get people like that, real pests … want a 10 pound bag of onions, or even a 50 pound bag, but balk at the absurdly cheap wholesale price we charge and offer us cash … as if we really will get one by the taxman because we sold some doofus 50 pounds of onions for a dollar less which we won’t report. We always tell these people, “we’re getting paid $12 per 50 pounds for 900 bags, and getting paid in 30 days (usually), why do I need to sell you a bag for $10?”

Well, going back to the customers today, as I watched them I thought to myself, “hey, these guys are a step down for Larry, Moe and Curly, I mean look at the shirts, and hats, and pants, and the way they walk, all that was missing was an occasional eye poke and ‘nyuck nyuck nyuck.'”

I had to stop and talk to them. First, while I was still on the forklift and Miguel was removing a cover off a box, I surreptitiously snapped some photos of them as they dug in a box: 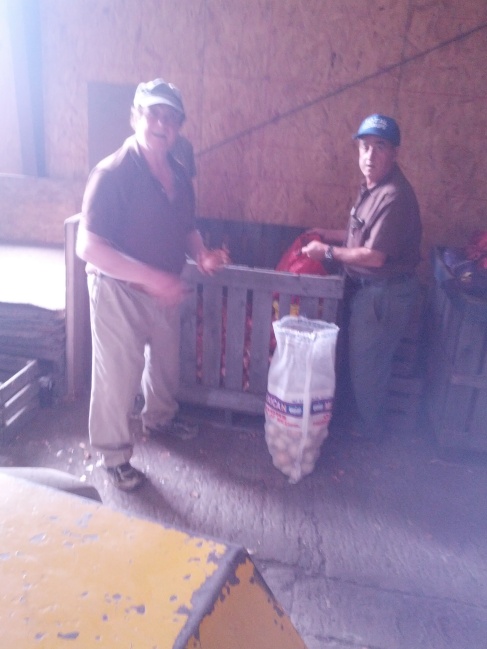 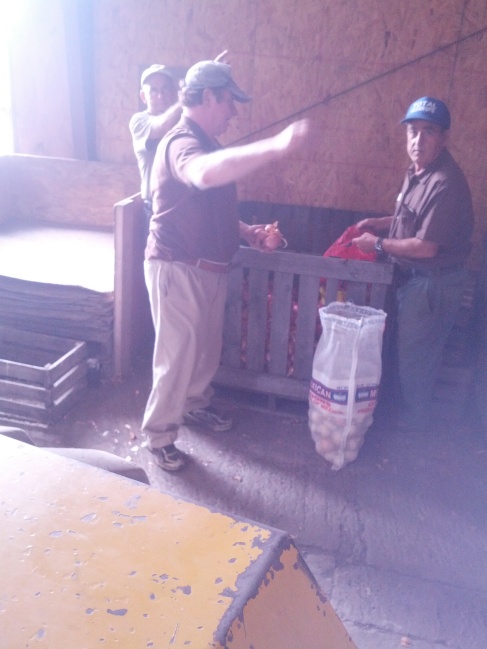 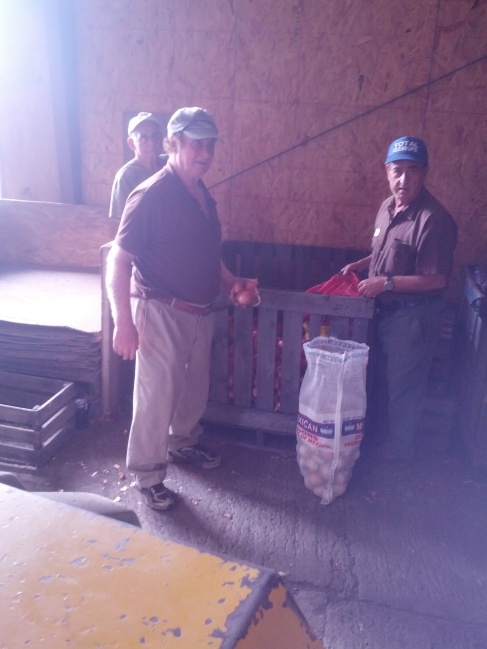 I then engaged in conversation with the guy wearing the hat that said “Total Clean Ups.” 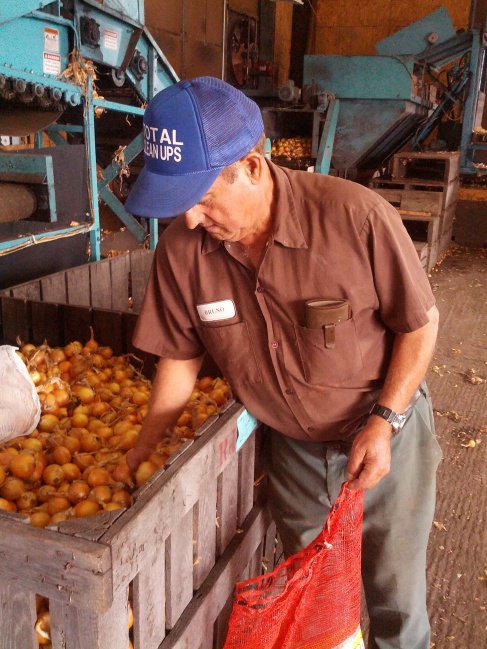 Me: “So, where are you fellas from, are you local?”

Total Clean Ups (in an ethnic accent I couldn’t at first place): “We’re from New Paltz. We got a farm, but not like this, small place, and we don’t grow onions.”

I looked at his shirt and noticed the name tag.

Me: “Your name must be Bruno.”

Total Clean Ups: “Nah, my name is Larry. Bruno is my brother, my other brother, I just wear his shirt after work.”

He then went back to work, furiously digging through a box of undersize onions. At this point the man with the white cap approached me. He had a raspy voice and a slight accent, one that sounded Polish.

White cap: “You guys Polish? Those two (motioning to the other other two guys, now both furiously digging through the box) are Italian.”

Me: “Are you all brothers?”

White cap (laughs): “What? No way! Those two are brothers. They are crazy! I’m just a friend. (yells to Larry) “Hey Larry, what are you going to do with all those onions?” (then continues with me) “They’re crazy, and their other brother is crazier yet.”

Me: “No, not really, though I did meet his shirt.”

At this point the brother of Larry, who looked like Rip Torn in one of his mug shots and whose fly was on the way to being fully open, approached me. I was a bit apprehensive because White Cap did say he was crazy.

Actually, he looked like he was the byproduct resulting from a romantic encounter between Rip Torn and Bela Lugosi. 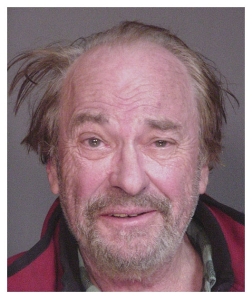 Fly open: “Hey, when are you going to start digging the potatoes?”

At this point these 3 Stooges started to load their car … with White Cap repeatedly asking the crazy brothers as he scratched his chin “what are you going to do with all these onions?” 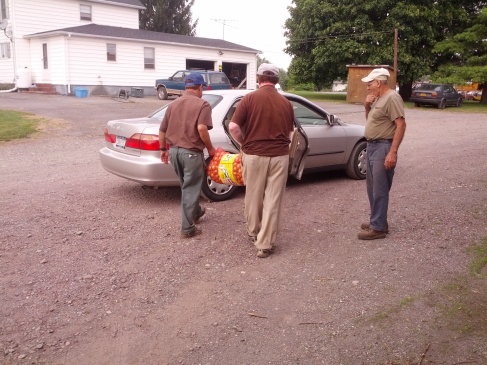 At one point White Cap grabbed a 50 pound bag which held about a dozen onions in it or so.

White Cap: “How much for this?”

They were buying over 200 pounds of onions … why did he need that? As I looked at the bag I think it contained onions that suffered mechanical damage and were just bagged to get them out of the way. I thought for a second and said:

He gave me a big smile. At this point an army truck full of onions pulled in and I had to go. I paused for a moment and wistfully hoped that one day my 3 Stooges would return for more onions to my farm.

1 thought on “The reincarnated Larry, Moe and Curly came to my farm to buy onions today”